Some wistful memories of the Victoria Memorial Eye and Ear Hospital 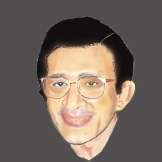 Sam
I wrote a piece about the Victoria Memorial Eye hospital and a version of this was sent to the Sri Lankan newspapers last year which they published. I wonder if you think it will be of interest to your blog which has a worldwide readership. I will send a drawing which I did of the hospital as a JPEG
Regards
ND 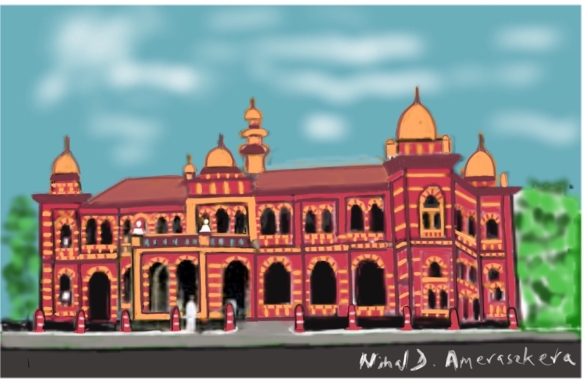 The Victoria Memorial Eye and Ear Hospital with its imposing architecture is an iconic landmark in Colombo. It faces the Lipton Circus, the roundabout named to remember Ceylon Tea that became famous all around the globe. This is now called the De Soysa Circus named after the philanthropist and entrepreneur Charles Henry De Soysa who also has the De Soysa Maternity Hospital named after him. The Victoria Memorial hospital established in 1906 was named to honour Queen Victoria and her Diamond Jubilee that was celebrated in 1897.

This red-brick colonial building was designed by Edward Skinner a British born Architect who emigrated to Ceylon circa 1894. The red bricks used in its construction gives it a grand and distinctive appearance. The history of red bricks dates back to the 12th century in Central and North-Western Europe. Many of the famous 19th century hospitals in London were made of red bricks like the University College Hospital and the Moorfields Eye Hospital. Skinner designed several recognisable buildings in Colombo including parts of the Galle Face Hotel, Cargills and Co, Victoria Masonic Temple, Wesley College, Lloyds Building in the Fort, and St. Andrew’s Scots Kirk in Galle Road Colombo. Although the Gothic Revival in Western architecture survived into the 20th Century, Edward Skinner most appropriately, decided on an Indo-Saracenic model for the hospital. The design and construction of the domes are reminiscent of the architecture of the Mughal period. The doors and windows have neat and stylish polychrome brick arches. Architecturally it can more than hold its own against the best of that period in the world.

The wife of the British Governor of the time, Lady Ridgway, laid the foundation For the Victoria Eye Hospital in 1903. It was opened for business with great optimism 2 years later. The cost of the building was divided equally between the government and the Anglophile general public. In 1905 it was considered the best in the colonies. It is now part of the National Hospital of Sri Lanka.

My earliest connection with the eye hospital was in 1952. I was far too young to appreciate its formal beauty. The world was a totally different place then. The veteran politician Dudley Senanayake was our Prime Minister. The doyen of cricket, F.C de Saram, captained the All-Ceylon team. I was then a scraggy kid in the boarding at Wesley College. Cricket occupied much of my mind and a great deal of my free time. I couldn’t read the blackboard in class and complained to the school Matron. She sent me with a chaperone to the Victoria Eye Hospital. I recall a young doctor’s questions about my vision. It amused him no end when I said I couldn’t see the blackboard nor the cricket ball. From then on, I began to wear glasses. Although I could read the blackboard, it never improved my cricket.

I saw the Victoria Memorial Eye hospital everyday when I was a medical student in the 1960’s and this exemplary building is now deeply rooted in my memory.  By then the Ophthalmology Services had moved to the brand-new hospital just around the corner from the old. The New National Eye Hospital of Colombo was established in 1962 to cater to the growing demands of the 20th century. Everything was moved to the new site, lock stock and barrel. In the melee the new relegated the old to near obscurity. The old Victoria Memorial Hospital, although parts of it were allowed to be derelict, continued to provide a service.  There was an ever-increasing demand for space in healthcare. In 1967 the Prime Minister Dudley Senanayake opened the Accident Service in the Victoria Memorial Hospital.

When I worked at the Central Blood Bank in Colombo in the early 1970’s the Victoria Memorial Hospital housed the Accident Service of the General Hospital Colombo. it was a part of my duties to cover the Blood transfusion work of the Accident Unit at night when the full time Medical Officer was away. I remember there was an ornate wooden staircase with beautiful carvings leading up to my office. The Office was a single room with high ceilings and two large windows in front facing Ward Place. There were lovely views of the red Leyland buses and the slow traffic that chugged around the Lipton Circus. I could see Peking Hotel which was beautifully lit which has now given way to Rajya Osu Sala. The rear wall had beautiful decorative wood panelling and I did  my work in Victorian splendour.

My sojourn at the Accident Service was an enjoyable one as most of the doctors who worked there were known to me. We were all young and idealistic. I soon got used to the buzz and the rush of adrenaline with the arrival of the ambulances. In those distant days the sirens and the flashing lights were less conspicuous. At times there was a sense of dread, and an expectation of a life-defining situation. I saw for myself the tragic drama that unfolded day after day and the weeping and the wailing that followed. It was a most humbling experience. We were in the habit of chatting away late into the night when there were gaps in the busy workload supported by multiple cups of coffee and tea. I look back on those years with great nostalgia of the friendship and the warmth that prevailed despite the sleepless nights.

Typical of Victorian buildings the hospital was a rabbit warren of narrow corridors and a multitude of rooms and recesses. At night much of it was dark and unlit. in the gloom they become ominous passageways. There is a strange belief which is universal that most old buildings were haunted. There were stories abound of mysterious happenings at night. Some believed the hospital was haunted by ghostly figures. The doctors who slept in that building have heard strange noises and others spoke of seeing humanoid figures appearing through closed doors. I slept in a dimly lit room in the Blood Bank. In all my years I never saw or heard anything untoward except the occasional cries of pain or screams of despair from the Accident Service which was right below me.

The Victoria Eye Hospital was built when architects created buildings for its elegance and beauty while making it functional and fit for purpose. On my occasional visits to Sri Lanka, I was appalled by the disdain shown to this landmark building in later years. There were large advertising billboards and hawker stalls covering the grandeur and the magnificence of its redbrick façade. The splendid entrance gates and the elegant porch are not in use anymore. Disuse, disrespect, and decay seemed everywhere and I feared may even destroy this forever. I am reliably informed and delighted to hear that the hospital remains a part of the National Hospital of Sri Lanka and has a Burns Unit, Surgical Theatres and also some Neuro Surgical Services.

As a medical student in the early 1960’s I had the good fortune to learn my trade in the new eye hospital. The post-World War II era is known as the age of brutalist concrete when beauty gave way to the cheap and cheerful. The 1960’s however was a time of enormous socio-political change which was reflected in the architecture of the time. Even if the designs were not pleasing to the eye they were practical and functional. Although the New Eye Hospital looked a huge block of concrete it was a state-of-the-art hospital with a modern layout and the very latest of facilities. With large wards, better lighting and fine operating facilities this was a far better working environment for the healthcare professionals. The design enabled the seamless interaction between clinicians, patients and students. The spacious waiting rooms and large airy areas dedicated for Out-Patient Clinics made it so much better for the public. I remember with affection the dedication of the eye surgeons and the high quality of the care they provided.

I am overwhelmed by a heady rush of history when I see the old hospital now. The Victoria Eye and Ear Hospital indeed is a part of our colonial past. Time catches up with all, but the past will always be present in our lives. Although well over a hundred years old, even now when the sunlight catches the paintwork the building looks a masterpiece. The hospital should be listed and preserved for posterity.

Edward Skinner was a brilliant architect. His wisdom and designs won him the admiration of the City and was popular and much sought after in Ceylon. He had his offices in the Colombo Fort. When he was recently married, he had a cycle accident and suffered with concussion from which he never fully recovered.  Sadly, Edward Skinner took his own life by hanging in his own office in the Colombo Fort on Boxing Day in 1910. The stunning designs he created in prestigious buildings in Colombo will remain as monuments for his superb architectural ability. Part of him will forever remain in the Victoria Memorial Eye and Ear Hospital. He died, far too young, at the age of 41 years when he had so much to offer this wonderful world.