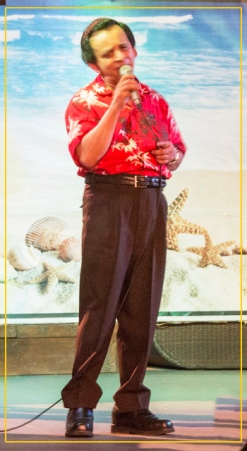 It was around 1963 before I entered med school, when  I first got a glimpse of Feizal’s singing. At the time  I used to visit a seaside social club known as Club Atlantic off Galle road in Colombo. Atlantic offered  a free musical program every Sunday afternoon.  Faizel was a frequent performer at the Atlantic. His performance included  hit songs of the day including Elvis , Cliff Richards, Jim Reaves and even some country and western in the mix. Later, shortly before I entered Med school, I was delighted to read about Feizal in the news paper,  when he won the popular Sunday Observer talent Quest.

Then in 1964 first day of starting Anatomy studies, students were gathered  outside Anatomy Block  waiting to enter the building when I heard a familiar singing voice, in the crowd. Fellow student was entertaining the crowd!  I soon  realized that it  was none other than Feizal himself!

Of Course the rest is history. Feizal is a very talented but modest kindhearted person with a golden voice. Singing was his passion. He continued to sing for us  all through   school days in addition to performing occationally  at lake Club in Kandy (for Rs. 25per night  , he says) and other private engagements in Colombo.

In early seventies I remember my visits to his home in Altoona PA along with my wife Kathy.  On many occasions we used to have impromtu sing songs in his private studio,  with Esiri and Nisantha often joining in.

I have had very minimal contact with Faizel after my retirement, until 2014 when we met up with him at the RU.  Last week I called him up to offer a personal invitation to the up coming RU’18.  He was more than happy to attend and entertain us at the upcoming  RU as well.

I was more impressed to hear about his more recent activities in SriLanka. He has been visiting his motherland almost anually performing in fund raising public concerts to benefit  pediatric cancer patients at Maragama Cancer hospital. Concerts were sponsored by private donations in addition to ticket sales. His biggest fan has been Prof Carlo Fonseka who always finds time to attend his concerts. Around  1973, Carlo was a house guest at my town house in Chicago,  when he attended sabbatical program at the University if Illinois.  Carlo often used to tell me then how much he missed his young daughter being away from home. According to Faizel, Carlo later wrote a song about his daughter. The song  was later popularized by Faizel in SriLanka. I am told this song is often used in SrLankan weddings.

The two tracks below are  from my own collection of Faizel songs that I happen to like very much. Hope you enjoy it as well.

Congratulations Faizel. Batch’64 is proud of your accomplishments in life and best of luck in your future endeavors. Cant wait to see you in October.